Originally, Henna is the Persian name for a flowering plant called Lawsonia inermis also known as the mignonette tree and the Egyptian privet, and which has dark green leaves, sweet smell, and grows up to ten feet.

The plant can be found in regions of dry climates like some parts of Africa, Asia and Australia, and each has been said to have different properties, especially in term of color.

The art of henna has been traditionally practiced solely by women, who dye some parts of their bodies not only for aesthetic capacities, but also to call on blessing, fortune, and prosperity, it is like a grace upon the skin.

It is very difficult to trace back the origins of Henna, but some findings show that it was used by the Egyptians, Jews, Greeks, Romans, Persians, and Indians. And each of these cultures used the plant for a different purpose.

Some evidences of what we presume to be Henna were found on the hands of some Egyptian mummies and which is considered to be part of the mummification process, and there are some good evidences that allude to that the henna plant was gifted by the Egypt to India and what explains the presence of the plant in this part of the world.

The henna plant is also connected to Hebrews and is believed to be the Camphire; a substance referred to in the Bible. 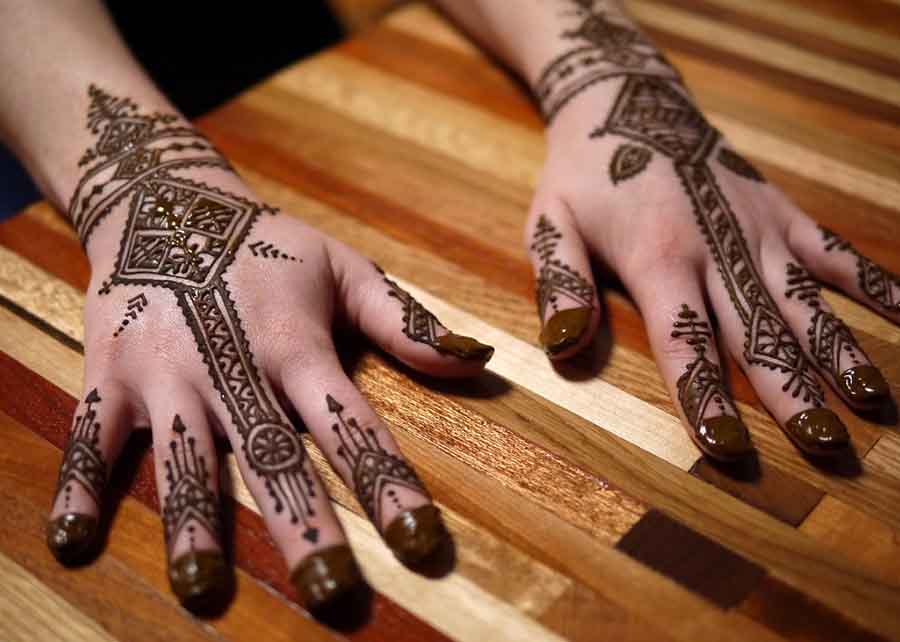 The existence of Henna has great significance in Muslim history, Muslim women stain their hands and feet, this custom is believed to be adopted during the Mogul Era, while the presence of Henna in Morocco is believed to be a result of the Berbers immigration to the region, and by the invasion of Arabs many Berber cultural rites were integrated to their customs, Notably Henna, the latter used for decoration as an alternative of tattoos which are considered forbidden in Islam.

Basically, the Henna is used for cosmetic capacities; to color hair or nails, but Medical and decorative reasons can also be added to its various functions.

Henna is believed to be a good hair conditioner that strengthens and binds keratin; a key material structure making up hair and nails, as it is often used to turn white or grey hair into darker color.

In addition to these cosmetic capacities, Henna is considered effective against lice, dandruff, and hair loss, and its cooling properties make it good as a deodorant to mask the smell of sweat.

Aside from the multiple aesthetic properties of Henna, it also serves many Medical functions. In ancient Egypt Henna played a key role in treating infections and inflammation, and stopping diarrhea, as it’s been considered effective against snakes and scorpion stings.

Applying Henna paste on head or hands is believed to treat fever and its cooling effects would bring the temperature down, while gargling an extract of boiled henna leaves is perfect to heal sore throat, and drinking it would be great for some stomach issues.

For centuries Henna has been present in almost all special occasions and occupied a major part ceremonially and ritually, especially in Muslim cultures, the application of Henna on women hands and feet is believed to show up their sexuality and protect them from the evil eye. Eid al-Fitr, Eid al-Adha, and Mawlid are all Muslim festivities that witness importat presence of Henna on women and children hands.

First make sure that your hands, feet or whatever part of body you would like to dye, is well moisturized and exfoliated, there are a variety of exfoliation products that you can find here in Morocco.

Ps: If you are willing to dye your hands or feet please make sure to get all the housework done before starting the staining process, because you won’t be able to do so until the following day.

The process of preparing the Henna paste is very simple, it may vary from one culture to another, but in its core still the same, after crushing the Henna leaves and turn them into a powder put the latter in a bowl and the liquid in another bowel, the liquid can be lemon juice, tea brew, or simply water; preferably bottled water, then smoothly add the powder to the liquid using one spoon while blending using another spoon, till the paste become as thick as a frosting cake.

When the right thickness and consistency is reached let the Henna paste sit in a warm place for at least two hours. 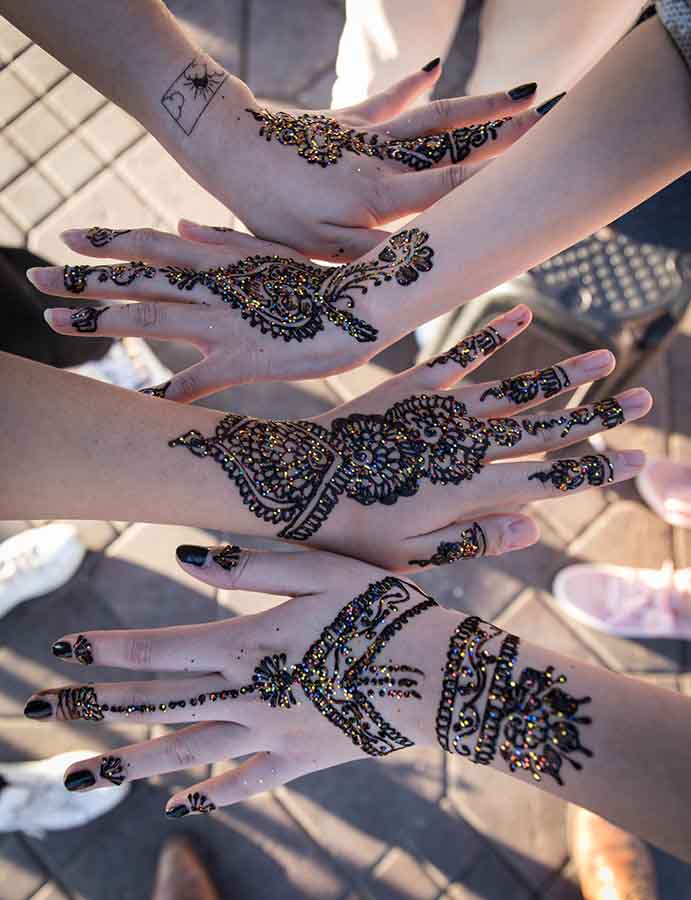 Henna painting is as fun and pleasant as decorating a cake, first you need to make sure that the person is about to be adorned is well positioned, Moroccan Henna artists suggest using pillows or a table to get the best fixed and steady position.

While designing, make sure that the lines you are creating are as thin as possible, the thinner the lines are, the more beautiful the design will be, and all this come with practice, as I mentioned above it is just like decorating a cake, this means your palm shouldn’t touch the cake and this makes it quite difficult for beginners.

Moroccan henna traditional artists often use syringes as a means of henna application, but there are other elements that one can use, namely a matchstick, needle, toothpick, or twig…

When the staining process is done let the Henna on the skin for at least 24 hours, the more the henna remains on the skin, the more deeper and lasting the color will be, before starting the staining process make sure that you already have prepared a mixture of lemon juice and sugar, once the henna start to dry apply this mixture on it using a ball of cotton, the lemon will help in making the color deeper, while the sugar will act as a fixative that stop the henna paste from flaking off.

In the Morccan way, cloves, fresh ginger, pepper, and freshly minced garlic are other ingredients that can be added to the lemon and sugar mixture, this recipe is believed to facilitate the process of peeling the henna off of the skin if wrapped and left overnight.

The designs and shapes vary from one culture to another and each pattern symbolizes a specific non-verbal belief, and because of the fact that the designs’ shapes and patterns are limitless, we are going to have a short insight into the traditional Moroccan ones.

Most Moroccan patterns are inspired by Berber culture, common shapes are the khamisa (Fatima’s Hand), an eye, or diamond shapes, which are believed to be a way of guarding against evil eye and ill fortune.

Other Moroccan designs incorporate geometric shapes like squares, circles, triangles and rectangles, floral patterns, plants and linear designs, plain but carrying powerful symbolism and to the point considered to be an integral part of the Moroccan culture.

Henna as way to express joy and happiness

In Morocco, the wedding celebrations basically last for three days, this may vary from one part to another, in the southern region for instance this may last for more than seven days, in either part one significant day is the Henna night, whereby the bride get her hands and feet dyed with henna in her house in a ceremonial atmosphere, while the bride get stained the family sing, dance on some folk music, and take picture with the bride and with each other.

One other event whereby henna is present is when a male get circumcised, circumcision, the excision of penile foreskin, is a must-do stage in every Muslim male, therefore, in addition to the other ceremonial activities like scarifying a sheep and the boy’s head shaving, the boy and some of his close family get their hands adorned with Henna in a ceremonial event punctuated with feasting, parties and celebrations.

Religious festivities are other ceremonial events that witness a great presence of Henna, Eid Al-Adha for instance, whereby all Muslims around the world scarify a sheep following the mores of the prophet Ibrahim as a personal willingness to be obedient to the mighty Allah (God), the sheep and the people get adorned with henna in a very joyful atmosphere.